Since the deadline was extended by one week I somehow managed to finish my steampunk challenge entry over at cgsociety yay! I uploaded the final image 10 minutes before the deadline. That was nerve-racking! 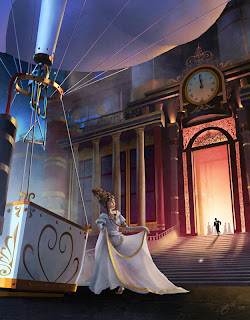 Cinderella, daughter of a wealthy pipe manufacturer, grew up in the loving care of her family until her mother died when she was six. Her father grieved for 7 years until he fell in love again with another woman, Lady Tremaine, who had 2 daughters of her own, Anastasia and Drizella. They married, but only half a year later Cinderellas father passed away as well, leaving Cinderella and all her fathers wealth and possessions in the care of her stepmother.
Lady Tremaine was a hard and cold woman. She doesnt care much for Cinderellas grief and makes her do hard work in the pipe factory shortly after her fathers death. The two daughters of her own get to be Cinderellas superiors and they use every opportunity they can find to make her life a living hell.

Now only a few houses away from the pipe factory is a giant powerplant that provides electricity for the whole city. It made its owner, Albert, one of the most powerfull and richest people in the entire city. He is a honorable and loving man that cares a lot for his famiy. And when his son returns home after fighting for his country far away in the south he asks him to find a wife so that he can be sure that there will be a heir to inherit all that he has built-up. But Victor, his son, was gone for a long long time and he is unsure how he should find a woman since all the women he knew were married already or they had already forgotten about him.
So his father decides to arrange a ball to which he would invite all the young unmarried women from the city.

Of course Cinderella would have loved to go to the ball as well, but she doesnt have a dress to wear. And since her stepmother inherited all the money of her father, she decides to ask her if she could help her out. But Lady Tremaine only laughs at her plea. There would be no way she would ever catch the attention of Victor, she said. Lots of girls that were much more beautiful than her would come to the ball as well. She tells her to stop daydreaming and continue with her work.

So on the night of the ball Cinderella has to stay in the factory all on her own, while Anastasia and Drizella get to take the whole day off to get ready for the big celebration that is about to happen. But suddenly, while she's sweeping the floor with tears in her eyes, a bright flash of light makes her look up. An old woman in dirty clothes and with a glowing wand in her hand appears infront of her. She introduces herself as fairy godmother and tells her that she shouldnt cry. She would help her to make it to the ball in time and she wouldnt need to worry about a thing. And without further ado she conjures up a gorgeous dress and turns an old pumpkin that was lying on the floor into a beautiful hot-air balloon which would take her directly to the ball. She adds that the magic would only last until midnight, so she had to hurry. And before Cinderella could reply there was another bright flash of light and the fairy was gone. Cinderella cant believe her luck. She swiftly puts on the dress and gets into the balloon.

Meanwhile at the ball Albert is getting dispaired of his son. Because even though all the most beautiful girls of the city are there, his son refuses to chose any of em. But then Cinderella enters the room and Victor falls in love with her on first sight. He asks her to dance with him and him and Cinderella have the times of her life. She completely loses track of time though and suddenly realizes that its almost midnight. She tells Victor that she really enjoyed her time with him but that she has to leave now. Victor tries to stop her and chases after her out of the ballroom as she's running away. He isnt able to catch up and once outside all that he can find of her is one of her slippers that she dropped.

He spends the rest of the night trying to match the slipper to the women at the ball, but none of their feet fit. He continues his search all through the next weeks until finally he finds Cinderella in the last of all places he would look, the pipe factory. And even though she doesnt look as pretty as she did in her dress on that night he instantly recognizes her beauty and asks her to marry him.

She agrees and they live happily ever after.

Here are some closeups... 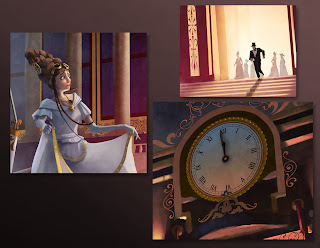 I'm glad that I could inspire my brother to create a soundtrack for
my entry. He imagined three sequences while composing the music: a camera move starting from above the castle, going through the village ending in the factory where cinderella is working, dreaming about a better life. I think it's pretty amazing. Check it out!

Thanks to everyone who supported me especially Kory who fed me with great ideas and brilliant suggestions throughout the challenge. And thanks to Stephan for translating the story while I was doing my last strokes on the Painting! It was a great challenge!
at 1:15 AM Labels: Paintings 8 comments

Something that came out while showing Jackson my painting workflow... 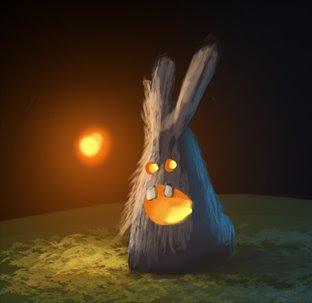 I went to the 21st Sketch Crawl yesterday. It was such a beautiful day by 20°C. I started sketching with my buddies Erwin, Chin and Joe at the ferry building and went to the meet up at the De Young Museum. Around 70 people joined sketch crawl yesterday. Here's a selection of the sketches I did yesterday. The Viatnamese food in the evening was really good! ^^v
at 1:56 AM Labels: Drawings 4 comments

Back from vacation...I went back to Germany for two weeks to visit my father and my friends. I had a great time! Happy new year everyone! 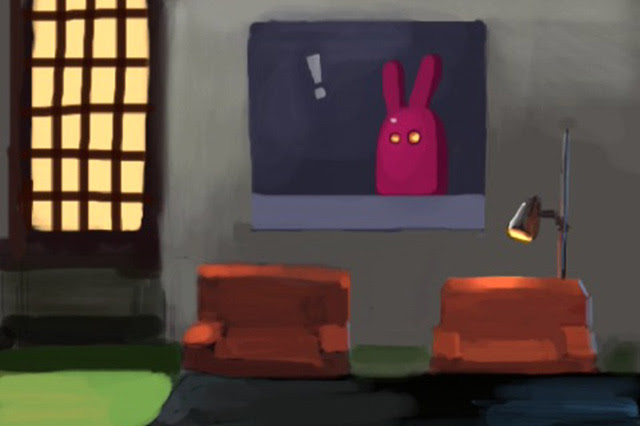 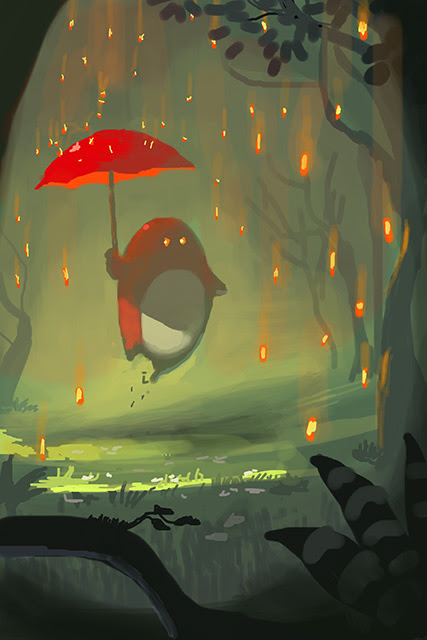