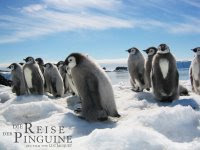 This weekend was a movie weekend ^^. I got back from 'La Marche de l'empereur (March Of The Penguins), a documentary about the life of emperor penguins directed by Luc Jaquet. After seeing this documentary I can say, these where the best recordings of penguins I've ever seen. The Camerawork and the editing was incredible and the penguis so adorable.
I don't know about the other versions but in the German version the voices were a bit annoying. A woman speaking for the female penguis, a man's voice for the male and a child speaking for the baby penguins. I didn't like that at all. And the music was also not the best choice. But even though I had fun watching those guys walking, falling over sometimes, swimming like torpedos etc. So if you like penguins or nature documentaries don't miss this one.
at 11:46 PM Labels: Random Stuff